Software defined radios (SDR) are an enabling technology for spectrum sharing that will support new and exciting applications that need the available bandwidth. The dynamic spectrum access paradigm, however, relies on secondary users (SUs) being cooperative and protocol-compliant. Wireless networks built upon cognitive radio technologies becomes vulnerable and their communications easily disrupted in the presence of dishonest or malicious SUs. Further, the high programmability associated with SDR devices, while enabling flexible communication, can also be exploited by an adversary to launch more sophisticated attacks. Ensuring reliable and robust communication for networks of SDRs and cognitive radios is a challenging task that is the focus of this NSF project.

In order to enhance the security of cognitive radio (CR) systems, improvements have been made and a ​paper has been published on using game theory to detect an intruder in a very wide band of spectrum. Assuming that the spectrum band is wider than the highest sampling rate a CR can support, the CR can only scan small parts of the band at a time. With variable SINR across the band, the gain the adversary can achieve by intruding different parts of the band can vary significantly. The gain will affect the probability that the adversary intrudes a certain part of the whole band. The game-theoretic approach described in the paper uses these probabilities across the band to determine the band the scanner will check in the attempt to detect the intruder. The paper divides time into discrete chunks to simplify the approach. First, the probabilities are calculated for different parts of the whole band, and then a decision is made on which part of the band will be scanned first. Then, depending on whether the intruder was detected, in each step these probabilities are adjusted, and the next subband to be scanned is determined. This approach enables CRs with low sampling rates to efficiently scan very wide bands of spectrum. An example of the game is shown on the figure below. The whole band was taken from 600 MHz to 800 MHz, with the highest sampling rate of the CR 20 MHz. X-axis represents the bandwidth, y-axis represents time. White ovals are the bands the intruder chose, and the parts of the band that are non-blue are the parts scanned. It is important to notice that in the sixth time interval the scanner chose the correct subband, but failed to detect the intruder due to high interference in this part of the whole band. 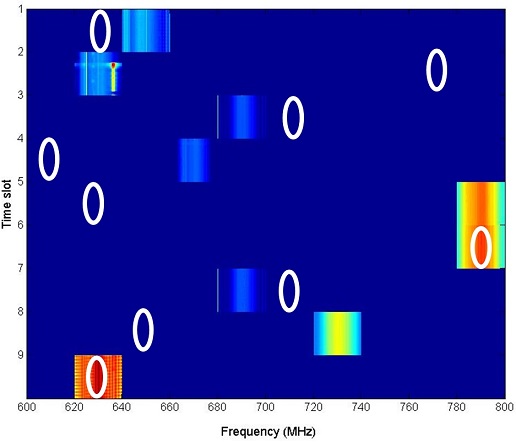 In order to support the coordinated spectrum sensing effort on multiple nodes, along with using a scheduled sensing scenario from a single centralized controller node, which implies running RF receivers on specific nodes at given time intervals with sensing parameters determined by the controller node during the process, a tool was developed entirely in C++. This programming language was chosen to avoid the large memory and processing overhead introduced by Python, which can be crucial at higher sampling rates (~200 Msps) with very high processing needs. This moved the bottleneck to the radio device capabilities themselves. The tool was named Wideband Software Extensible Radio Daemon (WiSERd), and was created as a monolithic but modular multi-threaded application. Making it monolithic enabled the best performance, and at the same time different parts of the functionality of the application were create as separate classes, making it modular to facilitate further development and functionality enhancements. The application is able to run a transmitter and a receiver at the same time in separate threads. Transmitter uses a producer class instance to create IQ samples for transmission, and the receiver uses consumer class instances to process the received data. Both of these classes were created using factor patterns, and templates for both the consumer and the producer class are available, making it as simple as possible to add different kinds of transmitted signals, as well as new processing algorithms for the received samples. Additionally, the radio module is implemented as a separate class, which facilitates adding support for different types of radio devices. Currently supported are USRP devices by Ettus Research, as well as Xilinx Zynq.

Ongoing research is currently focused on matters related to localizing and mitigating the effect of an interference source in a cognitive radio network, as well as improving spectrum scanning applications. Notably, the team is exploring enhancing experiments to more than 200MHz of spectrum through multi-sensor collaborative mechanisms.