This is a GENI project that addresses the challenges of integration and trial deployment of a commercial Mobile WiMAX radio as part of an open virtualized experimental framework. The project leverages a commercial 802.16e base station from NEC, replacing the standard WiMAX controller with an open software implementation that supports virtualization and layer 2/3 programmability. The most prominent features provided by the modifed BS control framework include the capability to perform all frame switching using purely layer 2 information, and control mechanisms to provide isolation across slices, which is needed to ensure experiment repeatability.

Integration of the WiMAX Basestation with GENI 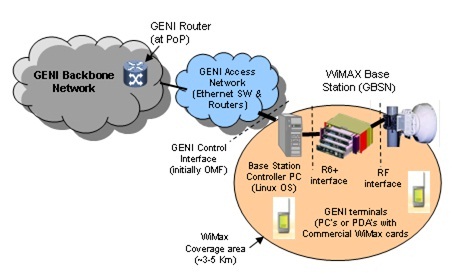 The figure above shows a schematic representation of the WiMAX base station router and its connection to the rest of the network. As shown, the WiMAX base station is typically connected to a GENI access network with layer 2 switched connectivity using Ethernet or optical fiber technology. The figure also indicates three distinct interfaces associated with the GENI WiMAX base station. The first is the GENI control interface for experimenter access to virtual networks (slices) supported by the external base station controller. This is the primary interface relevant to a GENI experimenter, and is currently based on the ORBIT Management Framework (OMF). The second interface is the so-called R6+ interface by which the base station controller communicates with the base station hardware (which includes its own internal controller running a proprietary NEC operating system and control/management software). The R6+ interface exposes the hardware features such as assignment of MAC/PHY resources (i.e. OFDMA time-frequency slots, power levels, service classification, etc.) to each flow, as well as management interfaces for initial configuration, scheduler policy selection and queue management.

(1) BTS setup with the ORBIT framework 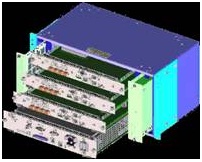 The NEC WiMAX base-station hardware (see photo below) is a 5U rack based system which consists of multiple Channel Cards (CHC) and a Network Interface Card. The shelf can be populated with up to three channel cards, each supporting one sector for a maximum of three sectors. The BS operates in the 2.5 Ghz or the 3.5 Ghz bands and can be tuned to use either 5, 7 or 10 Mhz channels. At the MAC frame level, 5 msec frames are supported as per the 802.16e standard. The TDD standard for multiplexing is supported where the sub-channels for the Downlink (DL) and Uplink (UL) can be partitioned in multiple time-frequency configurations. The base-station supports standard adaptive modulation schemes based on QPSK, 16QAM and 64QAM. The interface card provides one Ethernet Interface (10/100/1000) which will be used to connect to the high performance PC used to control the device. The base station has been tested for radio coverage and performance in realistic urban environments and is being used in early WiMAX deployments – typical coverage radius is ~3-5Km, and peak service bit-rates achievable range from 15-30 Mbps depending on operating mode and terrain. 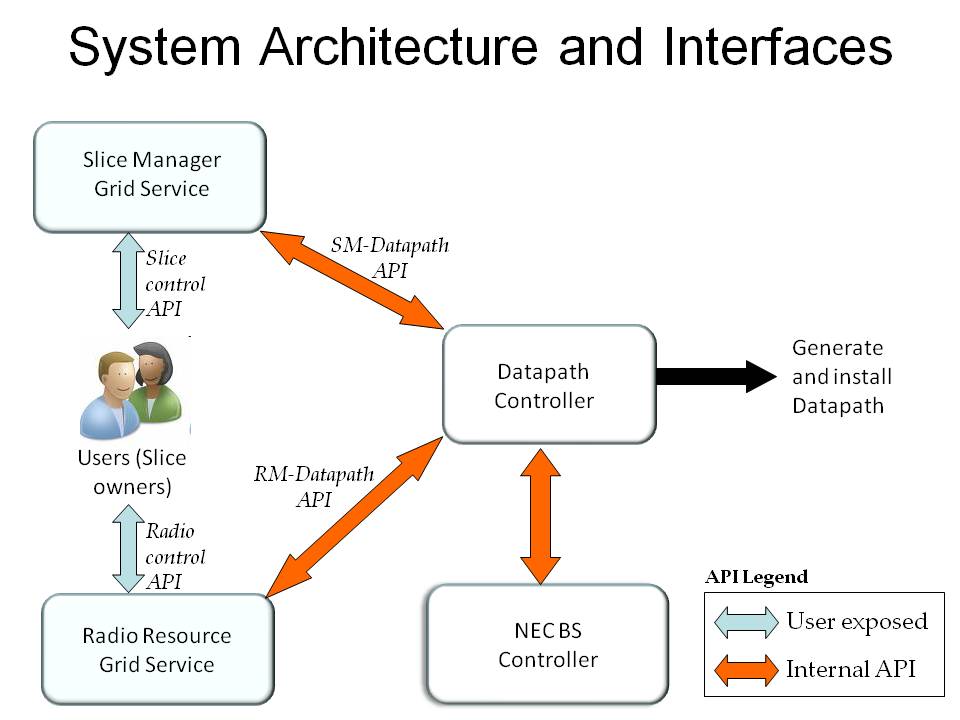 The virtualized WiMAX Basestation Transceiver (BTS) system consists of different sets of APIs shared by components of the system. A brief overview of the interaction between different system components is as shown in the Figure 1. The slice manager (SM) service allows the user to perform basic setup functions such as slice creation, instantiation, and destruction. The Radio management (RM) grid service allows the user to invoke all the WiMAX radio functionalities when operating as part of a slice. The SM and RM services in turn talk to other system components such as the datapath controller and NEC BS controller to execute API invoked by the Slice owners. The Datapath controller module is responsible for laying out the L2 datapath from the slice virtual machines to the physical WiMAX BTS. The NEC BTS controller allows for the getting and setting of various WiMAX radio features.