The ORBIT Chassis Manager (CM) is a simple, reliable, platform-independent subsystem for managing and autonomously monitoring the status of each node in the ORBIT network testbed. Currently there are 2 versions of the CM that are being used. The CM1 is used to control the generation 1 nodes, and the CM3 is being used to control the newer generation 3 nodes. CM2 was designed for the generation 2 nodes, which are no longer being used. There are basic requirements of all the CMs must preform common through all the revisions, those some of the details change.

As shown in Figure 1, each ORBIT grid node consists of one Radio Node with two radio interfaces, two Ethernet interfaces for experiment control & data, and one Chassis Manager (CM) with a separate 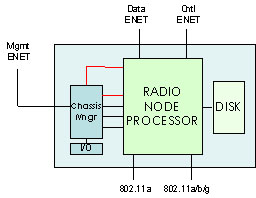 Ethernet network interface. The Radio nodes are positioned about one meter apart in a rectangular grid. Each CM is tightly coupled with its Radio Node host. CM subsystems are also used with non-grid support nodes. The CMC is the control and monitoring manager for all CM elements of ORBIT. An “Experiment Controller” (EC), also referred to as the “node handler”, is the ORBIT system component that configures the grid of Radio Nodes (through the CMC service) for each experiment. The non-Grid elements of the ORBIT lab are not normally in the management domain of the EC.

Each Chassis Manager is used to monitor the operating status of one node. It can determine out-of-limit voltage and temperature alarm conditions, and can regain control of the Radio Node when the system must return to a known state. Managing a system in this manner reduces the human resources needed to monitor hundreds of nodes. The CM subsystem also aids debugging by providing telnet to the system console of the Radio Node, as well as telnet access to a CM diagnostic console.