This page aims to serve as documentation for the on-going work to produce a topology mapping tool/service for the ORBIT testbeds.

Currently ORBIT does not have a framework with which users can easily set up network topologies for their experiments. Users may choose to build test topologies using methods such as:

among others, but this entails impromptu scripting or manual configuration. In the ideal scenario a user should be able to set up an experiment by providing a topology description file to a framework that would build the topology on their behalf.

The framework/service is expected to have at least the following components:

For now, ​GraphML has been chosen as the basis for describing topologies.

both on the nodes and network:

This section contains some initial design considerations for the various components listed above. The overall architecture will possibly work as follows: 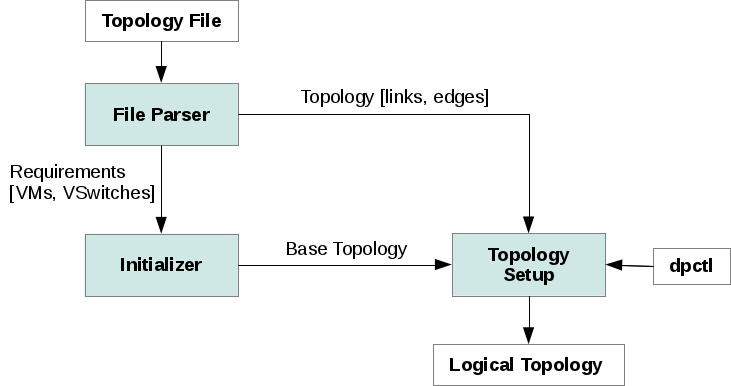 The file parser will produce two outputs, the node:edge information needed by the topology setup component, and a set of hints provided to a component that would initialize the base topology, which the final topology will be enforced upon using dpctl. Initialization would include actions such as starting up VMs and virtual switches, and checking that they are up and are in a configurable state.

It was assumed that ​Floodlight will be used for development. Several methods to enforce topology using SDN methods come to mind:

In any case, high-priority static entries would work for the best. As dpctl is the most device/controller independent, it will be used for configuration.