The sample topology to be setup is indicated in the diagram below. Here a single physical 802.11 NIC is being configured to act as multiple virtual access points. Nodes configured to act as stations connect to the corresponding virtual access point by explicitly choosing the appropriate ESSID. We used Iperf as our traffic generator to test the individual links. The two 802.11 networks are also seperated using explicit IP address allocation. 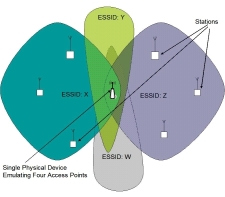 The user requests the creation of two 802.11 infrastructure-mode networks on a given set of nodes. Each network will have an access point and one station. The access point and the station are bound by the same essid's and belong to the same IP network. In the underlying architecture the user chooses the same physical interface on a node to act as a different access point on two seperate networks. The script shows that the user may be oblivious to the fact that he/she is requesting the same node to be acting as different AP's, thereby simulating the requests of two different users for two independent networks with the involvement of a common node (the virtual AP) without each others knowledge. The sample ruby script is as given below:

Location Of Changes To Be Made To The Script

Issues To Be Sorted